As schools reopen following the Easter break, thousands of students across 26 Auckland schools will be tucking into nutritious lunches prepared in North Harbour Stadium’s kitchen.

Stadium owner Auckland Unlimited—an Auckland Council organisation—and Spotless signed a commercial agreement late last year for the company to use the kitchen to prepare the lunches, marking the beginning of a unique and rewarding partnership.

The Downer-owned company won the contract to supply over 9,000 daily lunches for schools in the Henderson/Massey, Maungakiekie/Tamaki, and Orakei districts.

With a full production sized kitchen in the grandstand, Auckland Unlimited only needed to make minor investments to enable the kitchen to cater for 9,000+ meals a day. Spotless worked through the summer break to equip the kitchen, which officially opened earlier this year.

Auckland Mayor Phil Goff says that the partnership between council’s organisation Auckland Unlimited and Spotless was a win-win arrangement.

“We strongly support the government’s school lunch programme because it provides free, healthy lunches to kids going to school with the highest levels of disadvantage. These lunches really support children’s’ learning. It’s hard to learn when you’ve got an empty stomach,” he said.

“The kitchen at North Harbour Stadium is a big investment but it was hardly used during the week. Spotless is using it every school day. It’s ideal for their purposes and it produces a revenue stream for the council, which takes a bit more of a burden off ratepayers.

About 9,000 kids will get lunches prepared in the kitchen every day of the school week and preparing and serving the lunches creates employment for 90 people each week.

James Kafanelis, Executive General Manager for Downer’s Facilities Services and Utilities says the company is proud to be part of such an important nationwide service. “We’re committed to doing a great job for these schools; and to have the opportunity to employ people from these communities,” he says.

The school lunches programme is an exciting and much-needed contribution to health, vitality and educational outcomes for students across Auckland. We are delighted to be able to provide the production facilities for the Spotless team to use.

“At the same time, our agreement enables us to make full use of what was previously a very underutilised kitchen; and it creates a new income stream for both organisations," he says.

“This aptly demonstrates what is possible when we rethink how we can create value for Auckland out of assets like our stadiums; and fulfil our goal to enrich both cultural and economic life in Tāmaki Makaurau Auckland.” 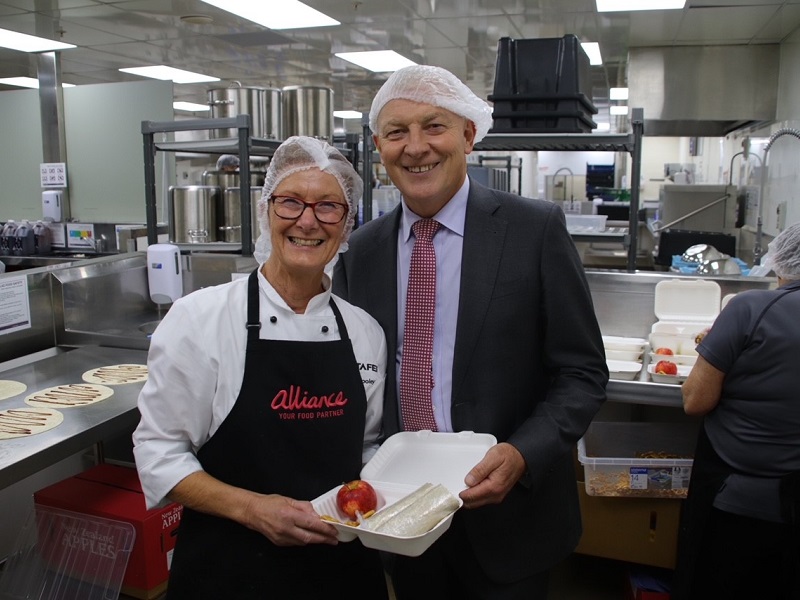 We strongly support the government’s school lunch programme because it provides free, healthy lunches to kids going to school with the highest levels of disadvantage.